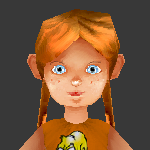 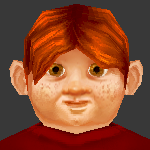 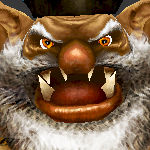 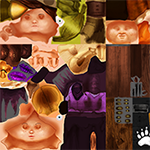 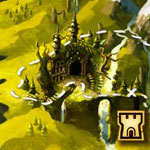 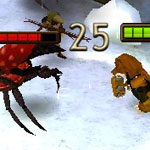 Kids vs Goblins is a casual action adventure game made for the iPad. Players take on the role of three children, stranded on an island as they look for their kidnapped baby brother.
The kids take on the twisted goblins, former humans corrupted by magical stones of power, in six different levels which have multiple different types of missions. Each kid has a set of magical spells they can use to defeat the goblins, but they can only carry a few spells at a time. With more than 60 spells to unlock there are many difficult different approaches possible and keep the gameplay fresh and interesting.

As this was our graduation project and the first official game for Stolen Couch Games, I am really proud of what we accomplished with this game. We learned a lot about using Unity3D as our game engine and about making mobile games.

This was the last project I animated IK only. I had this routine of creating a custom rig using the biped. But I am glad I stepped away from it. During Castaway Paradise I learned to animate with IK/FK using CAT and never looked back. For my graduation I created several animations using different approaches to 'find' a suitable animating approach for animating game characters.

The project started out as a PC/console game, but early on we switched to iPad because of the interesting possibilities the platform gave us. Also it was more realistic we could actually publish the game and let the whole world play our game. But because of the hardware switch we came into a lot of trouble. Our art was too demanding for the iPad 1. It would constantly crash because the game would load up too many megs in the RAM. We also suffered from a bug in Unity that didn't clear it's memory, so switching scenes would increment the amount of RAM until it crashed. Our environments and characters were not designed for the hardware. So eventually the project took an extra six months to tone down the art and optimise the game, so that it would run nicely on the hardware that we had targeted. 4K textures became 2K and a lot of triangles were cut. In hindsight we could have done things differently to keep the visuals more on par with what we wanted.

. We were approached by the site Crowd About Now through the HKU. We used the money to buy a Unity3D license and iOS developer license.

We also made an art book for Kids vs Goblins and released it for free on the iOS Book Store. It contains concept art and interactive 3D models from the game. We released when the Book Store opened and it has been a one of the most highly ranked books ever since. You can find it here