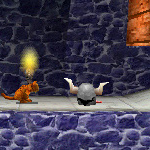 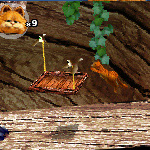 During the first period of my internship at Two Tribes I got the chance to work on a game that was to be released on the Nintendo DS. It was the first project I got to work on that was going to be released as a commercial game. I had no idea what it was going to be like. Working with a device that carried that hardware proved to be really challenging.

The project demanded from me to work with real world hardware restrictions. Working with a low polycount wasn't all that new to me, but preparing the textures for the device and making such small UV spaces work was the biggest challenge.

On this project I got to create a handful of levels for Garfield. For these levels I created the level designs (which was a first for me), model all the geometry of the environments, and model all the scenery objects. We made a library of some default models that could be reused and scattered over the levels.