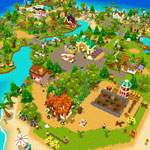 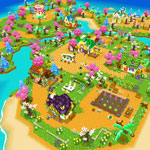 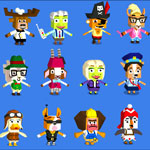 Released on iOS, Android and Steam

Castaway Paradise simulates life on a beautiful island populated by quirky animals. It can be described as a combination of several popular games, inspired by Animal Crossing, Harvest Moon and the Sims, also containing elements of Zelda style side quests, and a constantly evolving feature set as we add more things to do in our little game world.
The desire to create this game came to us because there were no games that are like the games mentioned on popular mobile platforms iOS and Android. Those experiences are mostly only available on Nintendo platforms and we wanted to bring those experiences to mobile devices like tablets and smartphones.

All 3D assets for this game are made either by me, or supervised by me. My job is to make sure all art assets work in the game and to translate all 2D designs and concept art into 3D. We made 32+ item sets containing hats and hairdos to dress up the player character and decorative items to spruce up the island and the player's little home. Each set contains about 12 items. And in total we have about 2000 unique items in the game that players can unlock.

We tried to come up with an art style that would be both nice to look at, but could be realised in low poly at the same time because the hardware we were aiming at wasn't very fast. And during the development of Kids vs Goblins

we learned a great deal of the things we did wrong. So we tried to avoid those mistakes with this project.

Next to being as low poly as possible, we restricted ourselves using as few textures as possible so that our RAM footprint would be as low as possible. So we needed a solution to create all these assets but still give them color and keep the models as small as possible in terms of vertices and triangles. The solution we came up with was very simple. We simply made one texture. And it would become our color palette. Each pixel would get a color, and I would UV map the models onto this texture. This would not only made our game smaller and more flexible, it kept our 2D team sane. Because they didn't have to 'waste' time with painting textures, but instead create a lot of concept art that was fairly easy to translate to 3D models that could be used in the game.

All assets were made with these self-imposed restriction in mind. I think we succeeded in this mission. The art style is coherent and it fits the genre of a casual adventurous simulation game for all ages.