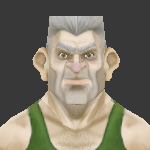 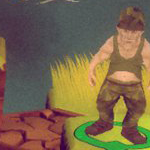 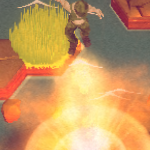 General Conflict was a very fun project to work on. It was a school project and was commissioned by W!Games a.k.a. Vanguard Games

. We got the assignment to create a game that would fit their MistBound universe features in games as Greed Corp.

Due to possible copyright issues we stepped down from the Mistbound universe. But W!Games would still function as a party to which we would pitch all updates. We had regular meetings in which we showed our progress and W!Games would give feedback on it. This was very helpful and informative. The feedback we got greatly improved the game.

My role in this project was all-round 3D artist. Out of 9 people we had 4 artists. I took the role as art lead on me. I really wanted to get the art of the game consistent. It was really hard when not every artist has the same level of experience. The end result is not bad, but notwhat I had in mind when we started out.

Of the four characters in the game I modelled and animated two of them. To get the best possible 3D characters we could make we started out with sculpting them in ZBrush. This helped to find the right shapes of the characters and to get a good sense of how they would look in 3D. These sculpts were then trace using TopoGun (which is a nice and light-weight tool to retopologize high density meshes). We also extracted normal maps out of these sculpts. But we took them out because they weren't visible, and didn't really add anything. Because of the fast-paced action the characters needed to be readable. So we give them brighter materials to stand out from the rest of the level.

When the characters were done, I started working on effects and other ways to improve the games graphics. A big problem I had to solve was how the water needed to look. We tried a lot of difference things but everything was too distracting. So we made it very simple by just using a particle emitter that used a small sprite animation to create the We For the exploding tiles I created an emitter that would send out a series of chunks from the exploded tile. This added a lot of physicality to the game.

Because of the simple concept, we had a working prototype really fast. Development went really smooth. We would daily have very long playing sessions where we just played the game hours on end because it was so much fun. This taught me that creating a game that you enjoy yourself is much more fun to develop and work on than a game that isn't fun at all.

You can download the game here. You need 2-4 XBOX 360 compatible controllers.