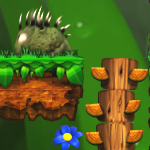 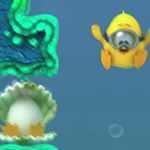 During the second part of my internship at Two Tribes I was assigned to animate new sprite sheets for the Toki Tori remake. Unfortunately I didn't get to animate Toki himself, but I got the chance to animati all the monsters Toki encounters during his adventure through the game world. It was a very got learning experience because at the time I had little experience with aniamtion. But I picked it up fairly easy and that was when my love for animation started.

All the character were animated and rendered in 3Ds Max. All the frames were rendered directly to sprite sheets. Which was a technology that was very new for me at the time. Due to the pipeline that was set up for the game, it was very easy to see the result of the animation in the game. This greatly sped up the animation process.

Next to the monsters I got to work on several environmental effects like waterfalls, lava, and bubbles.